skip to main | skip to sidebar

A NOTE TO THE CHINESE

I DO NOT HATE CHINESE PEOPLE. I ONLY HATE THE WAY THEY CONDUCT THEIR BUFFET RESTAURANTS. IF YOU CAN'T SEE THE HUMOR IN THIS, THEN CRAWL BACK UNDER YOUR ROCK AND TAKE A LONG NAP.
Posted by tm at 2:44 AM No comments:

Oh, those famous last words....countless american families spew out these same words when they are sick and tired of cooking. So we pack everyone up and head out to a chinese buffet. Yeah...all you can eat!!!! But you get there and your heart sinks because the food is overheated and stuck to the pans, all dried out. So then you settle for some rice, the cheapest food on earth. The chinese assholes are watching from the kitchen, thinking..."let them eat the rice and junk carbs. They will get bloated on that garbage then we won't have to give them anything with food value". Their main concern is to get enough tips to buy more opium. They want you out of that door as fast as you came in. Just watch how fast they run over to your table as soon as you get up to leave. They immediately rifle through everything on the table looking for that precious tip. Even though they treated you like a bum...THEY WANT THAT TIP. You might say..."hey, if you don't like the chinese buffets then don't go to them". RIGHT!! But we have stopped going to them. I just want to warn you before you have the problems we had at our last buffet meeting.
Posted by tm at 1:45 PM No comments:

I'll never forget that frightening night....But we laughed our balls off.

I'll never forget that frightening night when our group was out to our Chinese meeting when all of a sudden I heard, in a most disgusted, hateful tone, some mutant chinese gibberish intended for my virgin ears: "YOU...EAT TOO MUCH...YOU...YES YOU...TOO MUCH!!!!!". This was the most insulting experience I've ever had at one of these buffets, which were going downhill rapidly, and on that fateful night the truth was at it's clearest...THEY HATE OUR GUTS AT THESE BUFFETS. We had to flee from the cops that night, and basically I made a promise to the guys I would let the whole world know that CHINESE BUFFETS SUCK! This particular restaurant has an idiot manager who looks like a chinese version of Robert DeNiro on crack. And he has another henchman who lurks in the kitchen and looks like he has been smoking opium and only comes out when someone like me refuses to take their shit. Yes, it was a night to remember, and it will always stay in our minds. We still hold our meetings, but we try to go to places where we know we won't get the shaft, which is getting progressively more difficult as time marches on!
Posted by tm at 3:46 PM No comments:

You know what I mean...you go up to the buffet table and you find nothing but rice and junk carbs....very little protein.....and what meat and seafood there is consists of the lowest quality garbage available to man or beast. I feel that we need to make these assholes raise their quality. They came to this country based on rumours that "the streets are paved with gold"...and then what do they do? They shit in the streets....most, if not all, of these chinese restaurants are filthy, scummy, dirty dumps. When they first came to the US in the mid-seventies they were on their best behavior, then after we accepted them they simply said "fuck it"....now they just plain SUCK. Let's face it....that IS NOT CHICKEN you are eating. Just look at the so-called "chicken" in your "chicken and broccoli".....this is something "otherworldly"...or as I now call it..."thirdworldly". And that spongey so-called "beef"...IT IS NOT BEEF! It tastes like shit. OK...I'll let you explain here in your comments. I want this blog to grow so that we can make a change!
Posted by tm at 3:22 PM No comments:

This is how it looks when they first open....from there it goes downhill rapidly, nothing gets replenished except the junk carbs.

My gut feeling is that they use all of the leftover stuff that nobody wanted, including food from peoples plates which they didn't eat, then they grind it up real fine and stuff it all into these "egg rolls", while laughing their chinese balls off, thinking "there, take that you american dogs". 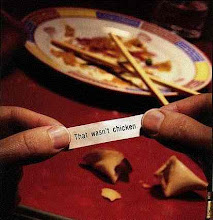 That wasn't chicken? Well, we knew that. The question is WHAT THE FUCK WAS IT ? 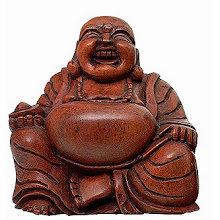 What he really means is: come on in you greedy american bastard...give us your money, then get sick on our garbage, you american trash.

A note found in the rest-room regarding female "napkins" 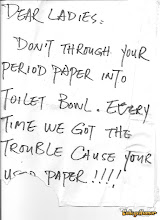 Yeah, this is a clean restaurant....can you imagine what goes on in the kitchen of this cesspool?

This is what your "golden brown pan-fried chinese wantons" are fried in behind those kitchen doors......I wouldn't feed my worst enemy something that came out of this frying pan, and yet the chinese dump buffets want you to leave them a tip for treating you like dirt?!!!!!

Did you ever get the pot of tea which comes "free" with your meal at these chinese dumphouses? I personally feel that it is nothing more than rusty water....do you really think they would give you something for free?

These people can't stand that you are there to eat all you can....they want you to pay and then drop dead.